In an informal conversation with a group of officials about how to handle a net that gets flipped up and over the ring after a made field goal attempt will invariably break along two lines.

Now there is nothing currently in the NFHS rule book (at least that our crack REF 60 research staff could find! 🙂 ) that deals with how to handle this scenario.

So if you’re inclined to NOT stop play, you won’t find any rule to tell you that you are wrong. And vice-versa.

So for the sake of this discussion, your crew decided in pregame to NOT stop play to specifically fix a tangled net, and now as fate, and Murphy’s Law would have it, you will have to contend with two different scenarios:

The field goal attempt (a jump shot) goes in the basket, but the ball gets cradled and stays in the tangled net.

The field goal attempt (a jump shot) goes in the basket, but the ball hits the tangled net with such force, it ricochets back out of the ring and onto the court where it is recovered by the defensive team.

And while you may not find any rule book answers for when to deal with a tangled up net; you will find relief for how to rule on these two field goal attempts. 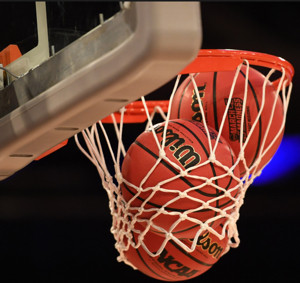 Because the language in Rule 5-1 states that, ‘a goal is made when a live ball enters the basket from above and REMAINS IN or passes through,’ we know that Scenario #1 should be ruled a legal goal (i.e. by Team A), and play would resume with a throw in by Team B along the end line.

And in Scenario #2, since the ball DID NOT remain in or go through the basket, we can deduce this would not be a legal goal (by Team A) and play would be allowed to continue on.

Now faithful readers of “60 Seconds on Officiating” know that we always try to weld the hard and fast rules to a reality-based approach to officiating that lets the players and the game shine bright in the spotlight.

So to that end, if you are going to stop play in Scenario #2 to explain the situation, you would be wise to be disciplined to do so after a player from either team gains possession of the ball. A premature whistle before possession is established would mean going to the alternating possession arrow to resume play.

And as far as determining your position on when to fix the tangled net, you will find refuge in the elastic power of Rule 2-3 which gives the officials authority to make decisions on any points not specifically covered in the rules.

If you do find the net to be getting flipped up routinely during a game, you may want to ask home management to ‘stretch the net’ that may fix the problem. If it doesn’t, you should alert your assignor/supervisor of this nuisance and hopefully it is resolved for your fellow officials that follow.

Now some officials find great comfort in immediately fixing a net that flips up over the ring after a made basket, (barring of course, any fastbreak attempt) to avoid any problems with ensuing shot attempts, no matter how remote the chance.

And other officials want to avoid any and all annoying ‘game interrupters,’ and a pesky net that keeps flipping up and causing a stoppage in play, would certainly fall into this category. And for that reason they choose to roll the dice and bet against the situations in Scenarios #1 and #2 ever happening.

You would not be wrong to follow the latter strategy; just make a mental note of this REF 60 post in the event Murphy’s Law visits you in an upcoming game!

7 thoughts on “The Net Effect”