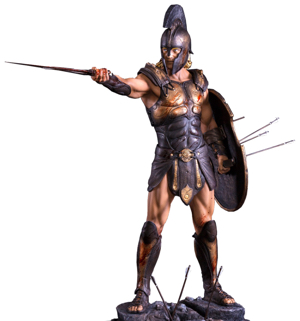 Perhaps there is merit to the opinion held by some assignors and supervisors who believe … all officials think they are better than they really are.

It has been said, half-jokingly of course, that two of the three officials selected to work the NCAA Championship game each year are secretly disappointed that they weren’t chosen to be the Referee on the game.

Officials looking to improve their schedule and to advance to the next level in an officiating journey might consider this.

Focus your energy in finding a way to pierce the Achilles heel of the current assignor(s) or supervisor(s).

Insincere fawning and general sucking up won’t cut deep enough to make a meaningful difference. You need some sharp arrows to bring this opponent to their knees.

Here are a few arrows that must be in your archery quiver:

Set a goal to show that you are near-flawless in your knowledge of the rules…Engage in sincere and insightful basketball conversations with the people of influence in your organization. Let the word go forth, that you are an image-of-difference official who can break down the rule book with the best of your peers.

Do you look the part of the premier official you claim to be by taking pride in your physical conditioning and appearance? The teams you officiate are stocked with rosters of the eternally young, while each season you get another year older. You must project an energetic demeanor and high level of fitness to attract the attention of the decision-makers on your radar screen.

Do you bring a demeanor into every game that conveys to coaches and players that you are calm and confident, but not cocky and confrontational? And does anyone mistake your kindness for weakness?…There is an indefinable “it” quality that assignors and supervisors look for from their elite game managers. It is a nebulous, hard to describe characteristic; but the decision-makers recognize it and will nurture those officials who they believe possess “it.”

Assignors and supervisors, like all people in positions of authority, have two lists. One list is for those who make their life easier; and the other is for those who make their life harder. For basketball purposes, which list are you on?…While it may be your referee ABILITY that makes you attractive to assignors and supervisors; it will be your depend-ABILITY and avail-ABILITY that determines the depth and length of their relationship with you.

Assignors and supervisors want high-skilled, low-maintenance officials who are great partners and bring a consistent standard of excellence to every contest. Assignors and supervisors cringe at officials who bring a condescending attitude and a “quick trigger” to a lower level game than they might normally work. You can adjust how you manage a game based on the skill level and age of the players, but not your attitude. A coach or player has to earn a “short leash;” you don’t prejudge them based on their skill set and level.

As you weld your innate officiating skills with a fierce work ethic to improve, be willing to share your talent with others. Be the rising tide that lifts every partner and game that you work with and for. Be an official that your peers are comfortable being around and who feel supported by your words and deeds. Be an official who new referees view as approachable and who they aspire to emulate.

These are the proven golden arrows that successful officials have used to ‘bring down’ the assignors and supervisors they have chosen to hunt.

3 thoughts on “An Assignor’s Achilles Heel”