Starting this year (2014-15) the scholastic games governed by the NFHS rules will permit players in the marked lane spaces to enter the lane when the BALL IS RELEASED by the free thrower.  This brings consistency to the collegiate and high school rule sets as it regard these player restrictions.

PRIOR to this change, we at “60 Seconds on Officiating” advocated LESS MOVEMENT in both the trail and lead officials movement when the free throw was released.  The basis of this was quite simple.  The players were not permitted to move until the ball touched the basket or backboard — therefore, it was best to stay somewhat still until the players moved into the lane area.  Not anymore.

Now that restrictions have changed – the timed movement of both officials becomes more important to continue the careful watch of your Primary Coverage Areas (PCA).

Movement should be to IMPROVE your position and MAINTAIN a credible calling angle.

In a scholastic contest there are a couple of tricks to remember what your PCA and lane space responsibilities are using the numbers 12 and 13. 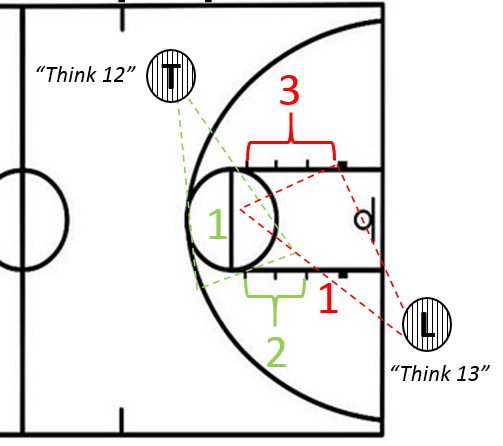 As the official opposite the table your visual angle should be to make sure you see clearly the thrower and the players in the opposite two lane spaces.  Now since players can be entering the lane on release you will need to STEP DOWN as the ball is released to maintain this optimal viewing angle.  Where in prior years it was more advantageous to wait until the ball touched the basket before moving – the time has shifted earlier.  Think about taking your single step down toward the basket as these players fill the lane.

The lead official (typically table side) will also step toward the basket line while still maintaining their depth and angle on the nearest lane space and the opposite three spaces.  (Remember 13 ?)

Movement should be SMOOTH and NOT PRIOR to the release of the free throw.

Both officials should come to a complete STOP as the ball nears the basket area and prepare to whistle any violations or fouls.

Additionally the TRAIL (or CENTER) Official opposite the table should be cognizant of not only the free thrower but also the players outside the 3 point arc and not in marked lane spaces.  The restrictions remain in effect until the free throw touches the ring / backboard or the free throw ends.

A few best practices to remember include:

These scholastic rule changes should allow officials to better monitor violations and fouls as they occur during free throw attempts.  Just keep in mind — move to improve as the action gets underway and the ball is released.  You will enjoy the new perspective in the game. 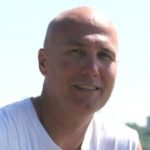 12 thoughts on “Move to Improve on Free Throws”