In order to rule “traveling” correctly, three questions must be addressed:

Keep in mind, it is not possible for a player to “travel” while dribbling.  Of course there could be other violations such as palming or illegal dribble – but not traveling.

When watching the “Euro Step” video note where the dribbler  was relative to a position on the floor when he ended the dribble.

Once the pivot foot is established … it may be LIFTED but NOT RETURNED to the floor before the ball is released for a pass or try for goal.

When breaking down the video watch for these key items:

If the answer to number three (above) was YES, then this Euro Step would be considered illegal.

If the ball was released then player stayed within the “prescribed limits” of movement and would be considered legal.

Worth mentioning is the action of the hand in the cross over movement while dribbling.  Did you consider this illegal “palming” of the ball during the dribble?

The move would be considered illegal if:

As player become quicker and more skilled there will be coaches that teach moves outside the prescribed limits of movement to test our knowledge and recognition of the dribble and travel rules.  By knowing the pivot foot limitations will be the first step in understanding the limitations of a dribbler when it comes to new moves like the Euro Step.

Give our “60 Seconds on Officiating” community YOUR opinion (below) on the legality of the Euro Step. 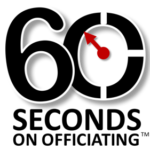 Since 2007, 60 Seconds on Officiating has been teaching, serving and inspiring basketball officials in over 90 countries worldwide.

Additionally through our Amazon educational library “Ref60” uses 100% of the proceeds from book sales for teaching current and future referees.

Thank you for being part of the community.