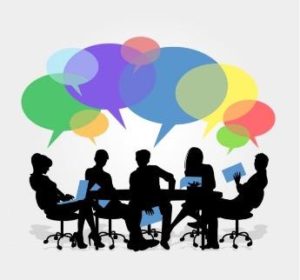 An informal gathering of basketball officials can be a great opportunity to improve your craft while in the company of men and women who share your passion for officiating and want to be better at mastering the rule book and their game managing skills.

The number of referees coming together is not as important as the mindset and spirit of those who are in this impromptu get-together. If the attitude is to share knowledge and experience, then most assuredly everyone will come away more informed for having taken part in this roundball roundtable session.

Invariably, the conversation will get to a point where someone offers up a personal experience (i.e. “wait until you hear what happened in my game tonight…”) or poses a question about something they saw in a game they were watching and he/she is wondering if the officials on the game handled it correctly.

You have been dropped into this referee roundtable, and your feedback will be greatly appreciated on these two scenarios:

Scenario #1: A-1 took a jump shot from the top of the key, and while the ball was in the air, A-2 shoved B-2 and the Lead official called a foul on A-2. Team B was in the bonus, but the referee said it was a team control foul and gave Team B the ball at the spot of the foul. Was he correct?

Scenario #2: In the third quarter, Team B was given a warning for huddling in the lane before a pair of free throws by B-1. Later in the fourth quarter, a player on Team B tapped the ball away following a score by Team B to slow down Team A from quickly inbounding the ball. The referee called a technical foul on Team B for delay of game. Was she correct?

The group has bantered both questions around some with great certainty in their answers, no matter how misguided some are…The group turns to you and asks for your thoughts, and because you are an avid viewer of the REF 60.com website you offer the following answers with as much humble swagger as you can muster:

“Well, we know that a team is in control of the ball when a player is holding, passing or dribbling a live ball inbounds or during an interrupted dribble. And we also know that neither team or player control exists when the ball is dead; during a jump ball or when the ball is in flight during a try or tap, so referee kicked the call…This is not a team control foul. Someone on the crew has to step up and make sure Team B gets to shoot one and one.”

The group is duly impressed with your explanation, and asks you to weigh in on the second scenario, to which you reply:

“Ok, a  team is entitled to one warning per game for a throw-in plane violation; for huddling with the free throw shooter; for interfering with the ball after a score; or failing to be ready to play following a timeout. A repeat of any of these actions by a team would warrant a technical foul. Team B’s huddling in the third quarter and interfering with the ball after a score in the fourth quarter will result in Team B being charged with a technical foul. She got the play right”

Your insight and cool, clean delivery earned you some well-deserved respect from your peers, and hopefully you were able to take away something that you heard in the discussion that will help your game.

Whether or not you are given a moment in the spotlight with your peers is not as important as incorporating referee roundtable sessions into your officiating education process is. Confirming what you know, and exposing what you don’t, will only serve to make you a better referee.

5 thoughts on “Referees at the Roundtable”