A-1 is holding the ball in a ‘triple threat’ position (deciding whether to to pass, shoot or dribble), when A-1 loses his/her balance and rocks forward touching the ball to the floor. A-1 uses the ball to steady him/her self and returns to an upright position and then proceeds to dribble.

The coach of Team B screams for a double-dribble violation to be called, claiming the act of touching the ball to the floor was A-1’s first dribble.

Does rocking forward and touching the ball to the floor constitute a dribble?

We’ll get back to that…

How about another scenario: A-1 beats B-1 in a foot race for a loose ball and gains possession by diving on the floor. A-1 cradles the ball as he/she slides several feet across the court, which ignites Team B’s bench and supporters, who are howling for the official to rule this a traveling violation.

A-1 then rolls over and passes the ball to a teammate, which sparks another outcry from the Team B bench and its fans.

Did A-1 in fact travel by sliding or by rolling over with the ball?

Rocking…Rolling…Sliding…What is an official to do?

The REF 60 mantra that, “rule competency breeds calmness and confidence in chaos” is the driving force behind all of the material that is published on our site. The desire to provide relevant educational content in small doses that will allow you to recall it quickly and easily is the foundation of 60 Seconds on Officiating.

Now on the the matter of A-1 touching the ball to the floor (once or several times) to brace him/her self from falling, (or for any reason); this action DOES NOT constitute the start of a dribble, so it would be perfectly legal for A-1 to begin a dribble after regaining his/her balance. 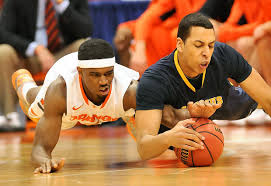 However, if A-1 were for any reason to touch his/her knee to the floor while holding the ball, this would be a traveling violation.  Remember A-1 could use his/her hand to touch the floor without committing a violation though.

If A-1 were to gain control of the ball while having one knee on the floor and stand up, you would be correct to rule this a traveling violation. However, if A-1 were to start a dribble before rising from one knee, this action would be legal.

Sliding over to the scenario of A-1 continuing to skid across the court after gaining possession of the ball, here is what to remember:

If you can form clear mental pictures of these scenarios you will be more proficient at ruling on them with a sharp whistle to enforce the violation that has quickly come upon you; or you will calmly let the legal play continue and use your confident demeanor to convey to the coaches, players and supporters that you have clearly observed the action in question, and that everything is fine and above board.

8 thoughts on “Rocking and Rolling”