When a team is granted a timeout, the coaches, players and bench personnel are ‘restricted’ to a designated timeout area inside an imaginary rectangle near their bench and are not permitted to go beyond this area to provide more detailed instruction.

Now you don’t want to be an official that, “majors in the minor” and starts nitpicking about teams being out of their imaginary corral while standing during a 30-second timeout. Rather the point of this 60 Second tip is to know where a coach is legally permitted to be during a timeout so that he/she does not gain an unfair teaching advantage… 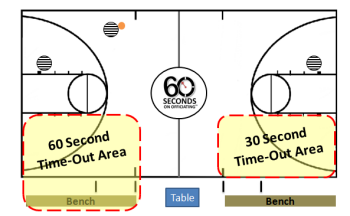 Quite often in crowded gyms where a visiting team may have to contend with boisterous home spectators sitting behind them, you will see a coach pull their team away from the bench area in order to communicate more effectively. However they must stay within the confines of the imaginary timeout rectangle.

So, keep in mind the time for on-court teaching and coaching is at practice. During an in-game timeout, all instruction must be done in the timeout area rectangle.